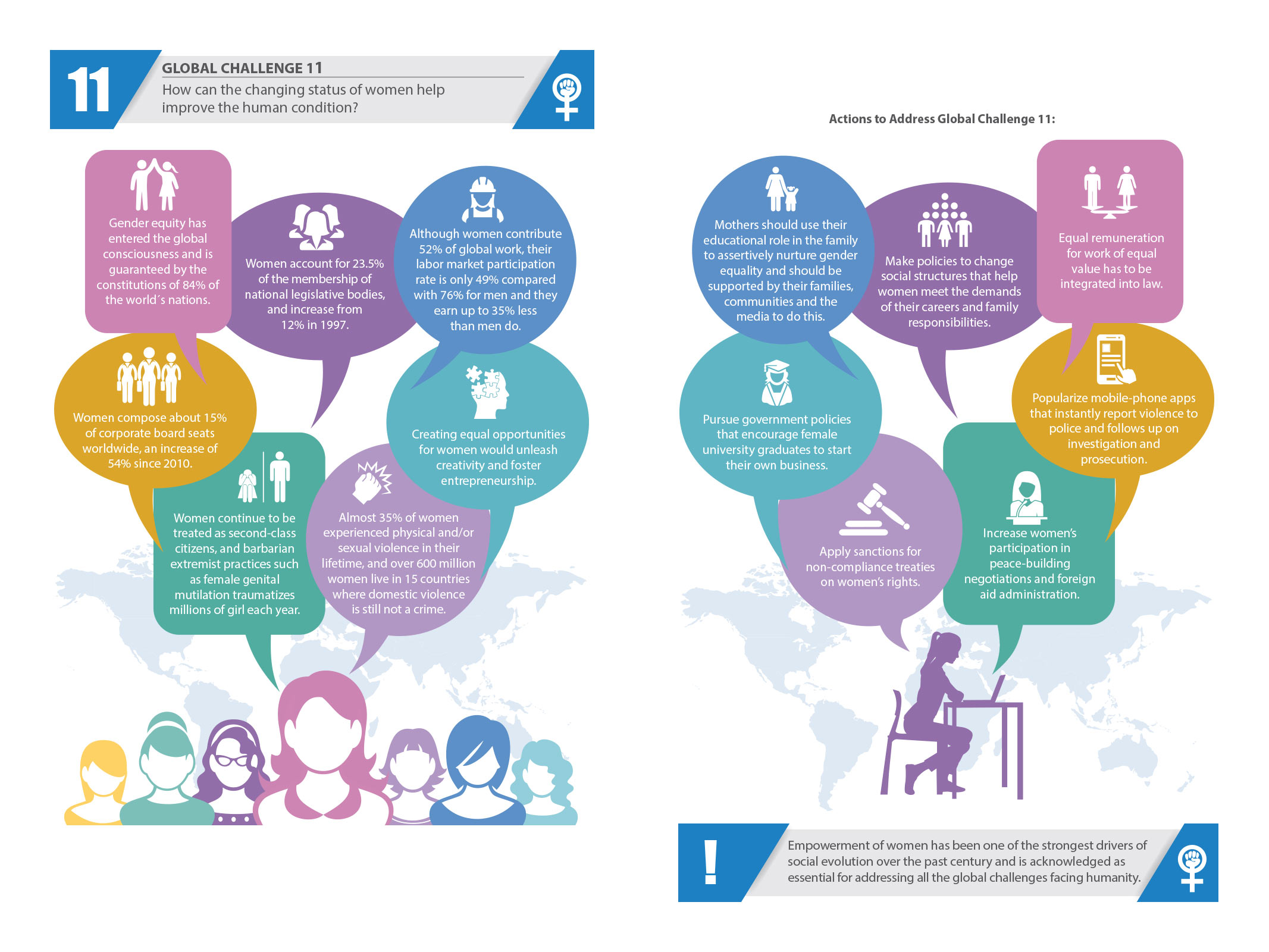 Challenge 11. How can the changing status of women help improve the human condition?

Empowerment of women has been one of the strongest drivers of social evolution over the past century and is acknowledged as essential for addressing all the global challenges facing humanity. Gender equity has entered the global consciousness and is guaranteed by the constitution of 84% of the world’s nations, while “the international women’s bill of rights” (CEDAW) has been ratified by all but seven countries. Women’s right to vote is virtually universal. Women account for 25.58% of the membership of national legislative bodies in 2021: an increase from 12% in 1997, and 52 nations have had a woman head of state in the past 50 years. Nevertheless, efforts have to increase if we want to meet UN Sustainable Development Goal 5 to achieve gender equality and empower all women and girls by 2030, as more than 50% of 10-year-olds live today in countries with high levels of gender inequality.

Although women contribute 52% of global work, their labor market participation rate is only 49% compared with 76% for men and they earn up to 35% less than men do. Women compose about 15% of corporate board seats worldwide, an increase of 54% since 2010, yet they own less tha2 20% of the land while nearly half of the agricultural workforce. Persistent discriminatory social structures have to be challenged to make progress in the future. Yet Oxfam notes that if a women’s paid employment rates were the same as men’s, in 15 major developing economies income per capita would rise by 14% by 2020 and 20% by 2030. However, at current rate of progress, in the G20 countries it would take another 75 years to achieve equal pay for equal work. And Covid has made it worse with lowered wages and increased workloads for women.

Women are more likely than men to be “solopreneurs,” creating new forms of work, although lack of adequate social safety net regimes put an extra burden on them. Creating equal opportunities for women would unleash creativity and foster entrepreneurship, mostly because the education gap has been generally closed and, in some countries, women outperform men in post-secondary education. The conversation on the status of women needs to transition from victimhood into modern-day powerhouse.

Since women drive 70–80% of all consumer purchasing, and given women’s educational responsibilities within the family, their education in responsible consumption could change patterns and address some of the other challenges facing humanity.

While the health gender gap is generally closing, recognizing women’s reproductive rights and providing effective family planning are yet to be guaranteed around the world. Women continue to be treated as second-class citizens, and barbarian extremist practices such as female genital mutilation traumatizes millions of girls each year, with an additional 86 million potential victims by 2030. Violence against women is the most under-reported crime worldwide, continuing to be perpetrated with impunity. Although 119 countries have laws that penalize domestic violence, almost 35% of women experienced physical and/or sexual violence in their lifetime, and over 600 million women live in 15 countries where domestic violence is still not a crime.

However, with the spread of the COVID-19 pandemic even the limited gains made in the past decades are at risk of being rolled back. The pandemic is deepening pre-existing inequalities, exposing vulnerabilities in social, political and economic systems which are in turn amplifying the impacts of the pandemic.

Nevertheless, a Millennium Project study on changing stereotypes concluded that slow but massive shifts in gender stereotypes will occur over the next few decades. (See “Changing Gender Stereotypes” in Research section of GFIS.)

Figure 1.11 Proportion of seats held by women in national parliaments
(% of members) 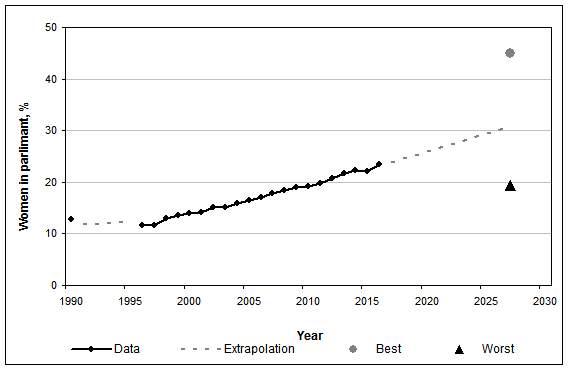 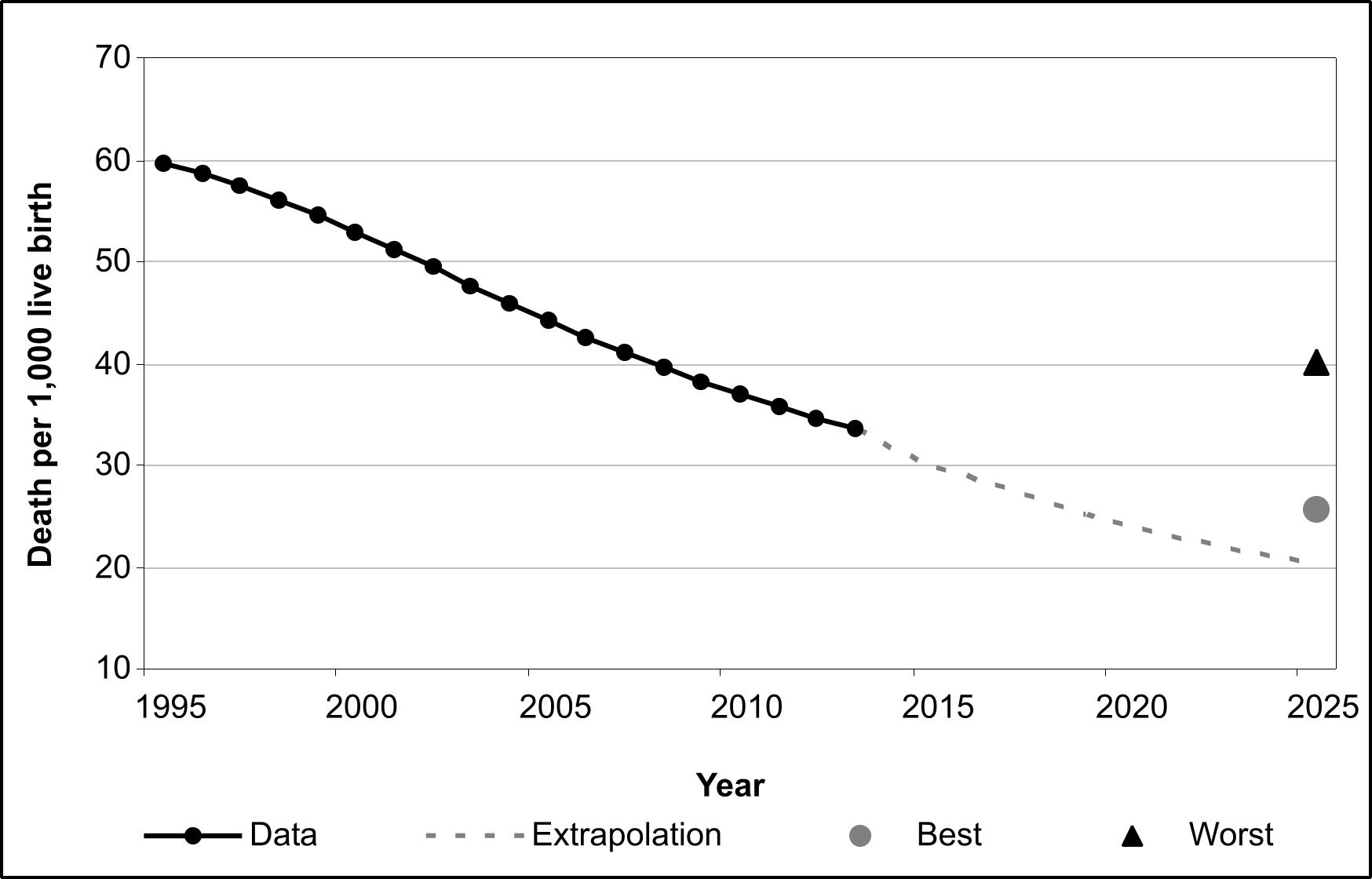