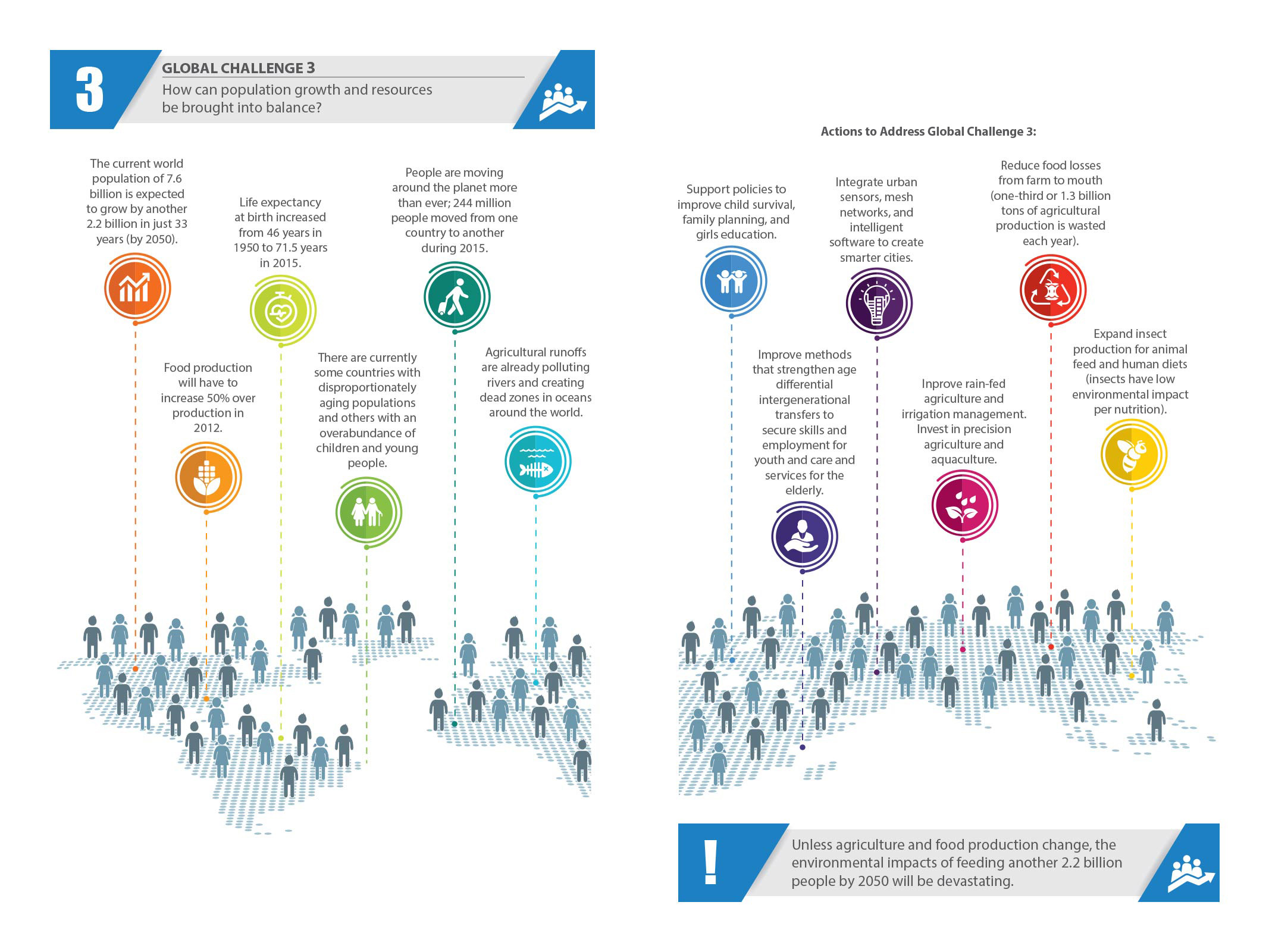 Challenge 3: How can population and resources be brought into balance?

The current world population of 7.9 billion is expected to grow by nearly 1.8 billion by 2050 creating unprecedented demand for food, water, energy, land, construction, and employment. Population is expected to double in the 49 least developed countries during this period. With economic growth, improvements in women’s education, child survival, and enhanced family planning, world population growth could be lower. Assuming a 9.7 billion population in 2050, FAO says food production would need to rise by 70% and double in the developing world; however, a recent review of studies shows only a 30-62% increase in demand from 2020 to 2050. Life expectancy at birth increased from 46 years in 1950 to 67 years in 2010 and about 73 years in 2022 (a temporary data correction is expected due to the Covid pandemic). The population over 65 is expected to grow from over 9% today to about 16% or 1.5 billion people by 2050. Those over 80 years are projected to be 426 million by 2050. A study published in The Lancet concluded that world population would peak at 9.73 billion in 2064 and fall to 8.79 in 2100 because the fertility rate is falling faster than previously expected. Deaths of children under 5 declined from 1 in 11 in 1990 to 1 in 27 in 2019. Falling fertility rates and increasing longevity will change retirement plans.

The uneven advances and implementation of health care, the variations in family planning and changing reproductive behavior, and the devastations of war, disease, and famine have left some countries with disproportionately aging populations and others with an overabundance of children and young people compared with workers and retirees. Much of Europe and some Asian countries will face difficulties in supporting their aging populations, while most of Africa, the Middle East, and much of Latin America have growing youth populations that will require massive growth in education and employment. Future migrations from low-income, high-youth-employment regions to high-income aging societies seem inevitable, as well as from oppressive to freer countries.

Raw materials consumption continued to increase. The UN’s global material footprint rose from 43 billion metric tons in 1990 to 92 billion in 2017 and is projected to increase to 190 billion by 2060. While China is becoming the world’s leader in total consumption of some commodities (coal, copper, etc.), the U.S. remains the per capita consumption leader for most resources. The environmental performance index lists Denmark 1st, USA 24th, and China 120th.

By 2050, there could be as many people over 65 as under 15, requiring new concepts of retirement. The breadth and depth of longevity research is dramatically increasing. The first senolytics treatments have begun. Life extension has been demonstrated in worms and mice. Human clinical trials are starting with metformin and rapamacyn. Advances in longevity R&D are likely to help many more people live much longer and healthier lives than current trends. This includes regenerative medicine, DNA repair, and other longevity strategies. For example, scanning ultrasound removes amyloid-β and restores memory in 75% of Alzheimer’s diseased rats. If this and other related research can work on humans, then older people mentally and physically youthful could be an economic asset rather than a liability.

Such advances will be needed; otherwise, the long-term future health costs of an aging society cannot be met. Global aging creates need for elderly care, longevity research, elderly employment and volunteer opportunity matching, physical infrastructures, family support, continuing education, bio-monitoring. Return on investments into healthy aging infrastructures will be less than future costs without it; hence, the cost of inaction will be greater than investment costs. Delaying the onset of age-related chronic disease by one year in the US is estimated to save the US economy $37 trillion. Human brain projects, artificial intelligence, and other advances are likely to eventually prevent mental deterioration in old age and even increase intelligence. People will work past current retirement age and create many forms of work. The elderly already contributes 29% to Europe’s GPD and 40% the US.  This will reduce the economic burden on younger generations and provide a more interesting life for the elderly.

However, the world is not creating Eco-Smart-resilient cities and retrofitting older cities fast enough to prevent future large-scale complex disasters from decaying infrastructures for water, energy, waste, transportation, housing, food, and security. About 40% of the world’s land is degraded (deforestation, pollution, erosion, desertification, sea level rise) and could increase to 50% by 2050. Urban populations will nearly double by 2050, increasing the pressure on nature especially in developing-country cities, where nearly all of the population growth will occur. AI connected to IoT and sensor networks will be needed to provide real-time information for continual land use management and urban repair, improvement, and public participation. Early examples are Songdo in South Korea, Masdar City in Abu Dhabi, Neom in Saudi Arabia, and Toyota’s Woven City in Japan. India is implementing a plan to retrofit all major cities to be smart cities. China has launched nearly 200 smart city pilot projects.

Unless agriculture and food production change, the environmental impacts of feeding another 2 billion people by 2050 plus improved nutrition for 800+ million undernourished today will be devastating. Agricultural runoffs are already polluting rivers and creating ocean dead zones around the world. Factory farming is increasing food-borne diseases and can reduce the nutrient content of crops, thus escalating the risk of hidden hunger (sufficient calories but insufficient nutrition). Although undernourishment fall from 19% some 25 years ago to about 10.6% in 2015, it has stopped falling since then and is now 811 million in 2020, up from 690 million the previous year. Malnutrition has stunted the growth of 75.2 million children under 5 years in the 55 food-crisis countries or territories. At the same time, more than 41 million children under five are overweight or obese, of which 10 million are in Africa. The Covid pandemic is expected to increase malnutrition.

About 70% of human-use water is used for agriculture. The majority of that water is used to grow food for animals to eat, that we eat. Water tables are falling on all continents. Around 60% of humanity gets its water supply from rivers with sources controlled by two or more countries. Water demand will increase as lower income countries industrialize and add another 2 billion people or so by 2050. If we cut out the “middle man” (animals) and produce pure meat directly from genetic material, CO2 emissions would be reduced along with requirements for water, energy, and land. If saltwater/seawater agriculture is developed along the wasteland coastlines of the world, carbon is pulled from the air, fresh water demand is reduced along with problems of rain fall (or lack thereof), and can produce (among other things) algae (for biofuels and feedstock for growing meat without animals).

Add in regional considerations in Asia; In five years – by 2027, India is likely to pass China to become the most populous country changing geopollical perceptions.