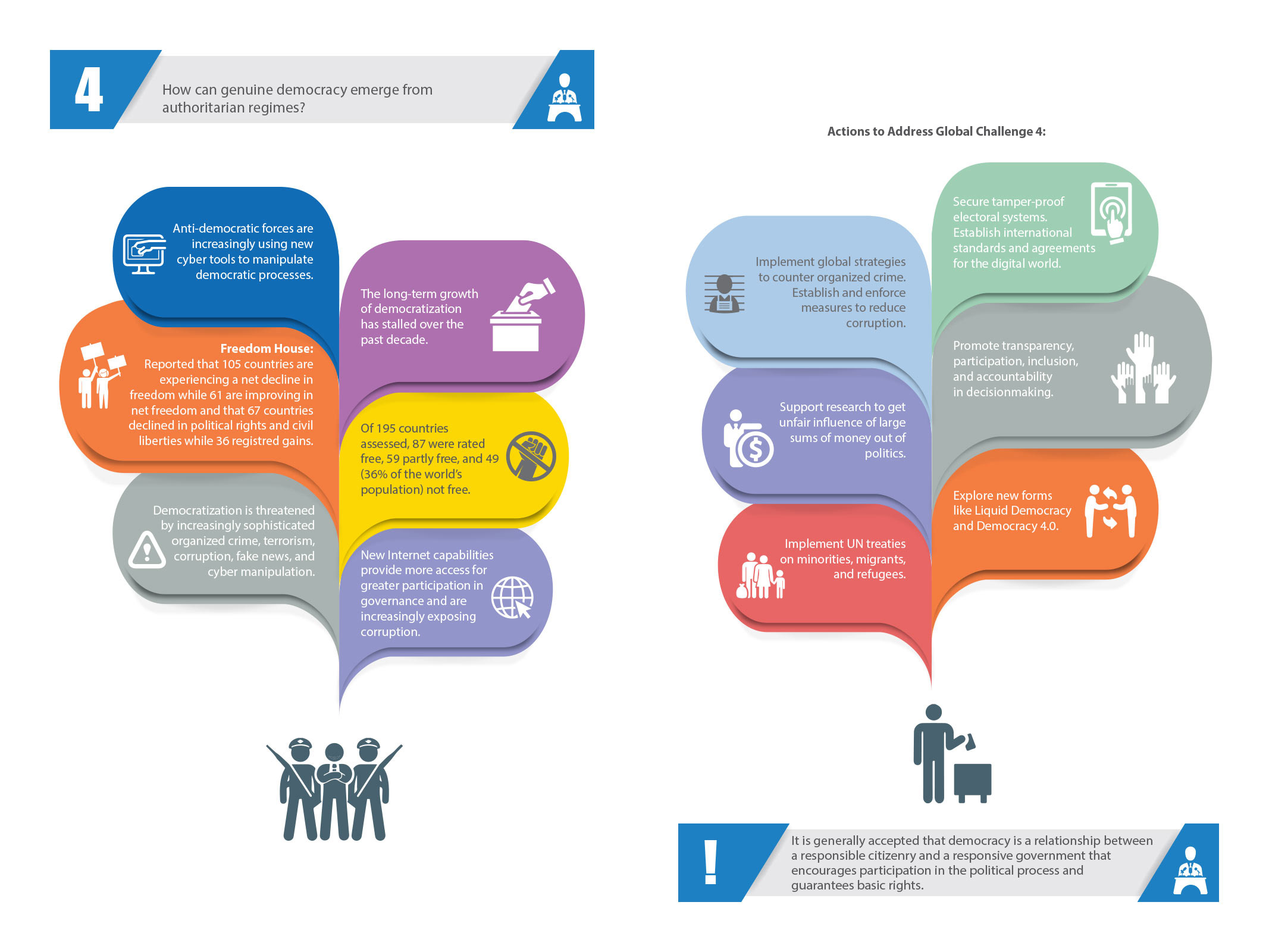 Global Challenge 4: How can genuine democracy emerge from authoritarian regimes?

The long-term growth of democratization has declined over the past decade. About 70% of the world is governed by authoritarian regimes, up from 49% in 2011.  Press freedoms have also declined, while toxic polarization has increased. The internet has become a new battle field of information warfare with millions of fake bots spreading disinformation turning “I don’t like, to I hate, to they are the enemy.” Better counters to disinformation need to be implemented. The COVID-19 pandemic has also contributed to a decline in freedom.

Although the perceptions and implementations of democracy differ globally, it is generally accepted that democracy is a relationship between a responsible citizenry and a responsive government that encourages participation in the political process and guarantees basic rights. NGOs like Transparency International and intergovernmental organizations like the Open Government Partnership (OGP) reinforce democracy internationally. The OGP connects 75 national and 15 subnational governments that have committed to 2,500 actions to promote transparency, empower citizens, fight corruption, and harness new technologies to strengthen governance. Global trends, such as the increasing interdependencies, the changing nature of power, worsening polarization worldwide, growing mobility, and the increasingly urgent need to collectively address major planetary existential challenges demonstrate the importance of the organization’s work and democratization. However, democratization is threatened by increasingly sophisticated organized crime, terrorism, corruption, disinformation, and manipulation of elections and the electorate.

The Committee to Protect Journalists reports that 1,416 journalists have been killed between 1992 and 2021 (including killed media workers, this number rises to 1,531). Out of all cases, 726 journalists have been killed with complete impunity. Most victims covered politics (49%), war (41.7%), human rights (22%), corruption (21.3%), and crime (18.2%). The UN Plan of Action on the Safety of Journalists adopted in 2012, outlines more than 100 areas of work in which different UN agencies and civil society groups intend to contribute to securing the safety of journalists, operating at the national and global levels. 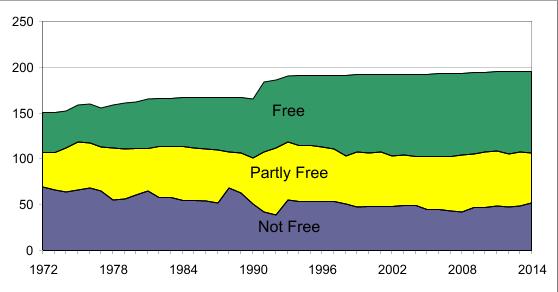 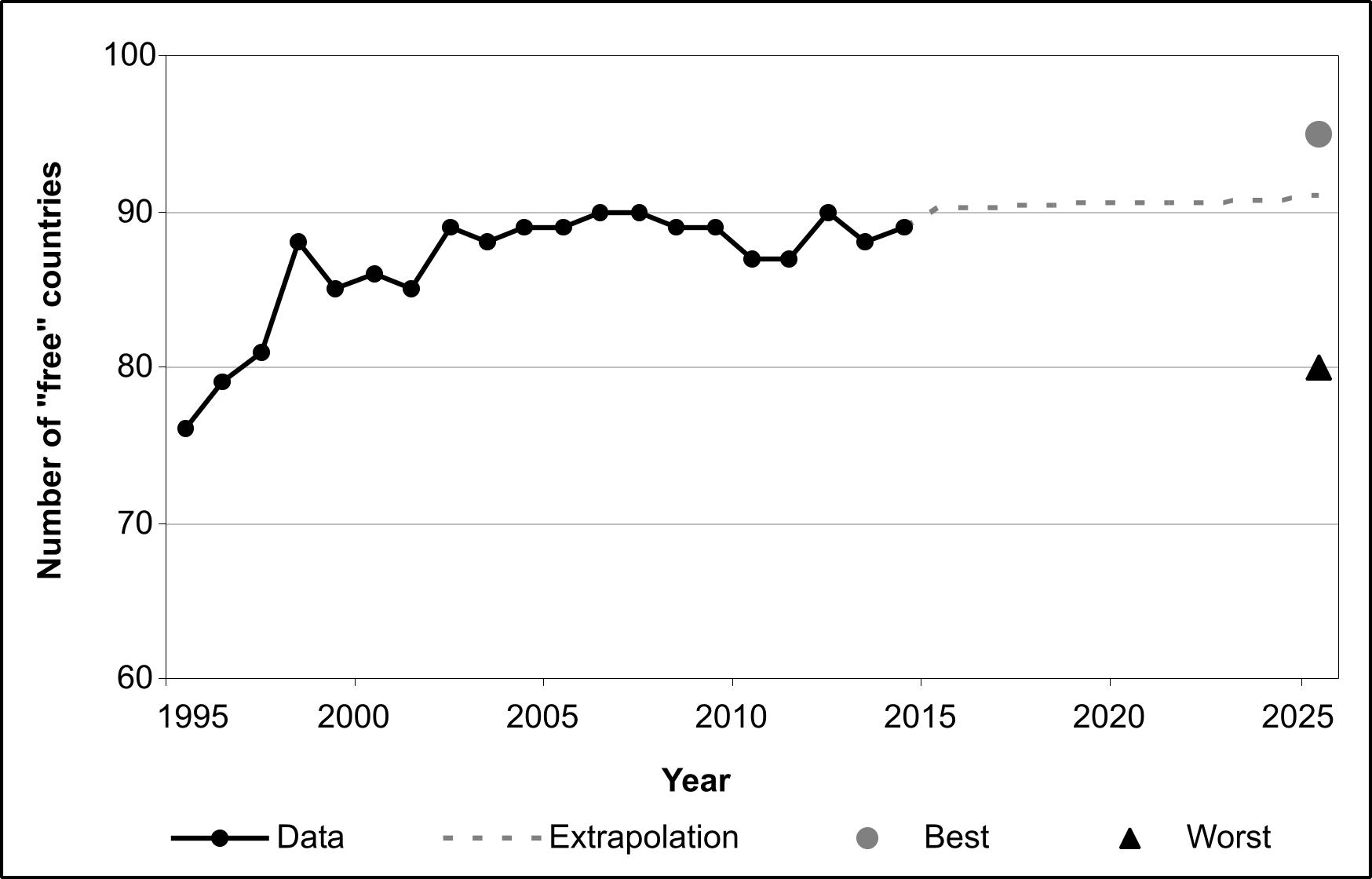 Source: Freedom House, with Millennium Project compilation and forecast; graph from the 2015-16 State of the Future
Scroll