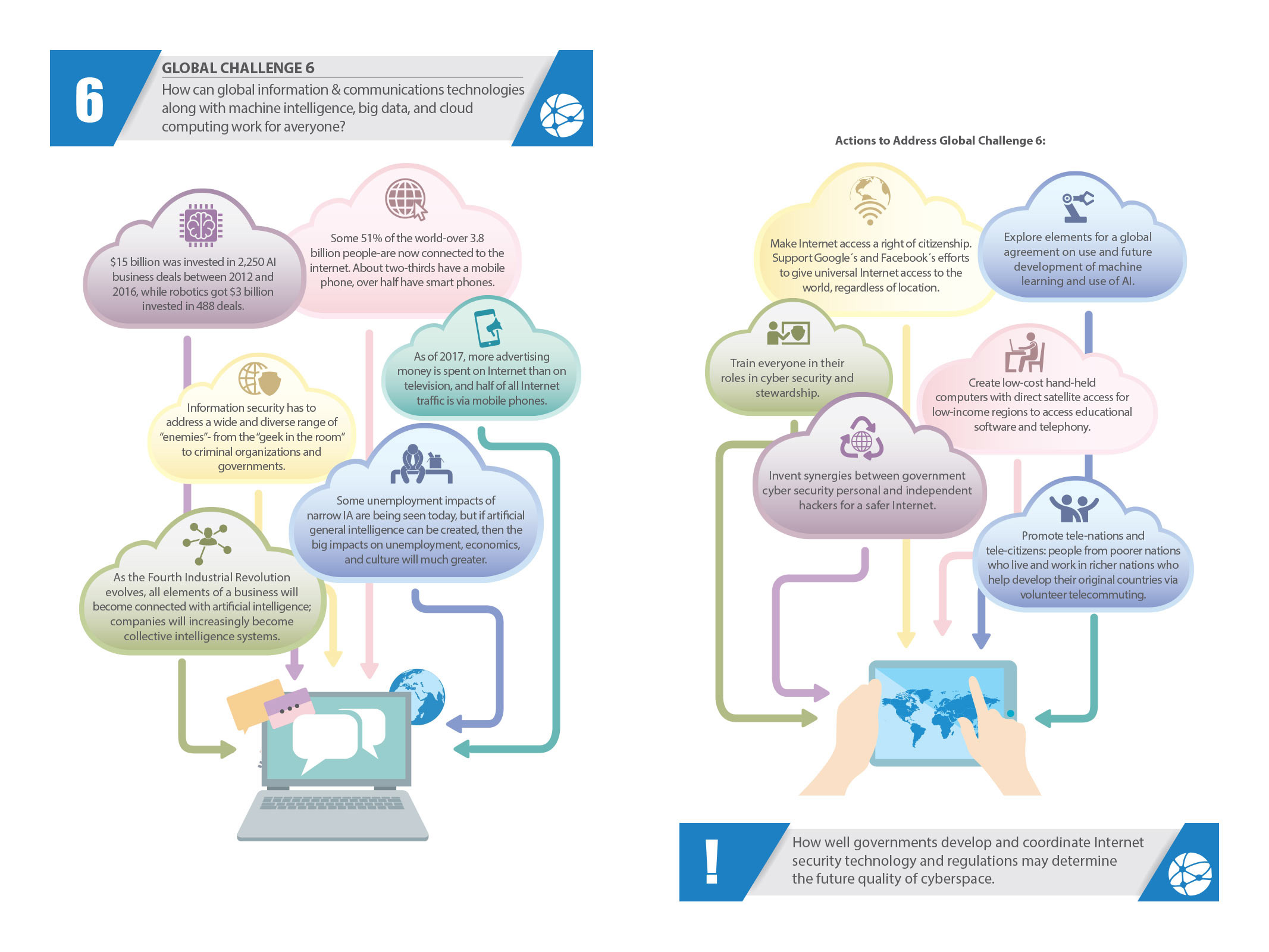 Global Challenge 6: How can global information & communications technologies along with machine intelligence, big data, and cloud computing work for everyone?

Elon Musk’s Starlink is completing global access to Internet with the most advanced broadbad system via thousands of micro-satellites launched by SpaceX. The internet is expect to grow to 5.3 billion users by 2023. About two-thirds of the people in the world have a mobile phone; over half have smart phones. The continued development and proliferation of smart phone apps are putting state-of-the-art artificial narrow intelligence (ANI) systems in the palm of many hands around the world. The race is on to complete the global nervous system of civilization and make supercomputing power available to everyone.

Another race is to develop artificial general intelligence (AGI), which might never get developed, but some think it is possible in 10 to 15 years. If so, its impact will be far beyond ANI. However, if we don’t get the initial conditions “right” for AGI, it could evolve into an artificial super intelligence (ASI) beyond our awareness that science fiction has warned about. Investments in AGI are forecast to reach $50 billion by 2023.The human brain projects of U.S., EU, China, and other countries, plus corporate ANI and AGI research, should lead to augmented individual human and collective intelligence. China has declared its goal of being the world’s AI leader by 2030. President Putin of Russia said whoever leads in AI rules the world. International and national AI strategies are being created.

Cybercrime increased 600% during the Covid pandemic. Ransomware accounts for 70% of all malware payloads. Global cost of cybercrime is estimated to grow the $10.5 trillion annually be 2025. With the evolution of the Internet of Things, wearable computers, autonomous vehicles, and brain-computer interfaces, cyber security will become increasingly important. Low-cost computers are replacing high-cost weapons as an instrument of power in asymmetrical cyber and information warfare. Information security should address a wide and diverse range of “enemies”—from the “geek in the back room” to criminal organizations and governments. At least 21 countries shutdown the internet 50 times between January and May of 2021. During 2019, 25 countries shut down the Internet 213 times, up from 196 times in 2018, mostly in Asia and Africa.

As of 2017, more advertising money was spent on Internet than on television, and half of all internet traffic is via mobile phones. Rapidly increasing video, AR/VR, and IoT use raises concerns about anticipating and meeting future bandwidth demands for an internet infrastructure this is not designed for these applications, but whose reliability has become strategically vital for much of civilization. More than a billion hours are viewed each day on YouTube.

Blockchain is being explored as a new approach to IoT security, as is quantum entanglement. Quantum cryptography is an emerging security technology in which two parties can generate shared, secret cryptographic material between ground stations or between Earth and satellite (as demonstrated in June 2017 by China). Yet quantum computers could be used to defeat some security systems as well. All this is leading one day to a global-scale quantum Internet. In December 2020 China announced a quantum computer calculation in 200 seconds at room temperature that a supercomputer would take 2.5 billion years to complete. IBM’s 127 qubit chip is available for commercial use and IBM has produced a 2-nanometer chip with 50 billion transistors on the size of a fingernail increasing performance and reducing energy demand. IBM announced it will have a 1,000-cubit chip in 2023 and 1-million-cubit chip by 2030 (10 qubits allows for 1,000 calculations at the same time, 30 qubits allows for a billion calculations at the same time).

As the Fourth Industrial Revolution evolves, all elements of a business will become connected with artificial narrow intelligence; companies will increasingly become collective intelligence systems. Financial services and other kinds of businesses could just become software. The three kinds of artificial intelligence are artificial narrow, single-purpose intelligence (what we have today); artificial general intelligence, adaptable to multiple purposes re-writing its own code (which might not be possible, but some expect it by 2030); and artificial super intelligence, general intelligence that sets its own goals independent of humans (what science fiction warns about). Some unemployment impacts of narrow AI are being seen today, but if artificial general intelligence can be created, then the big impacts on unemployment, economics, and culture will much greater. Facebook (now Meta) closed down AI bots that created their own language that humans could not understand, and Google’s AutoML can create new AI better and faster than humans, using layers of neural networks. Europol has created NoMoreRensom to decrypt and unlock computers under ransom attacks.

Who owns the intellectual property of AI produced by AI with participation of many inputs from humans and sensors around the world? How can standards, certification, and testing keep up with AI when humans will no longer know completely how it works? Meanwhile, tele-everything continues to grow. Over 700 universities offered 6,850 tele-education MOOCs to 58 million students during 2016. Global telemedicine was valued at approximately $18.20 billion in 2016 and is expected to reach approximately $38 billion by 2022. 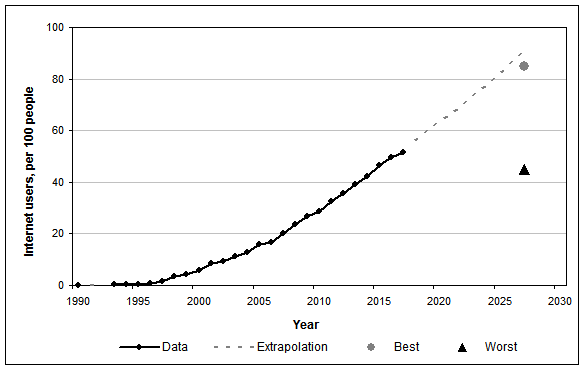