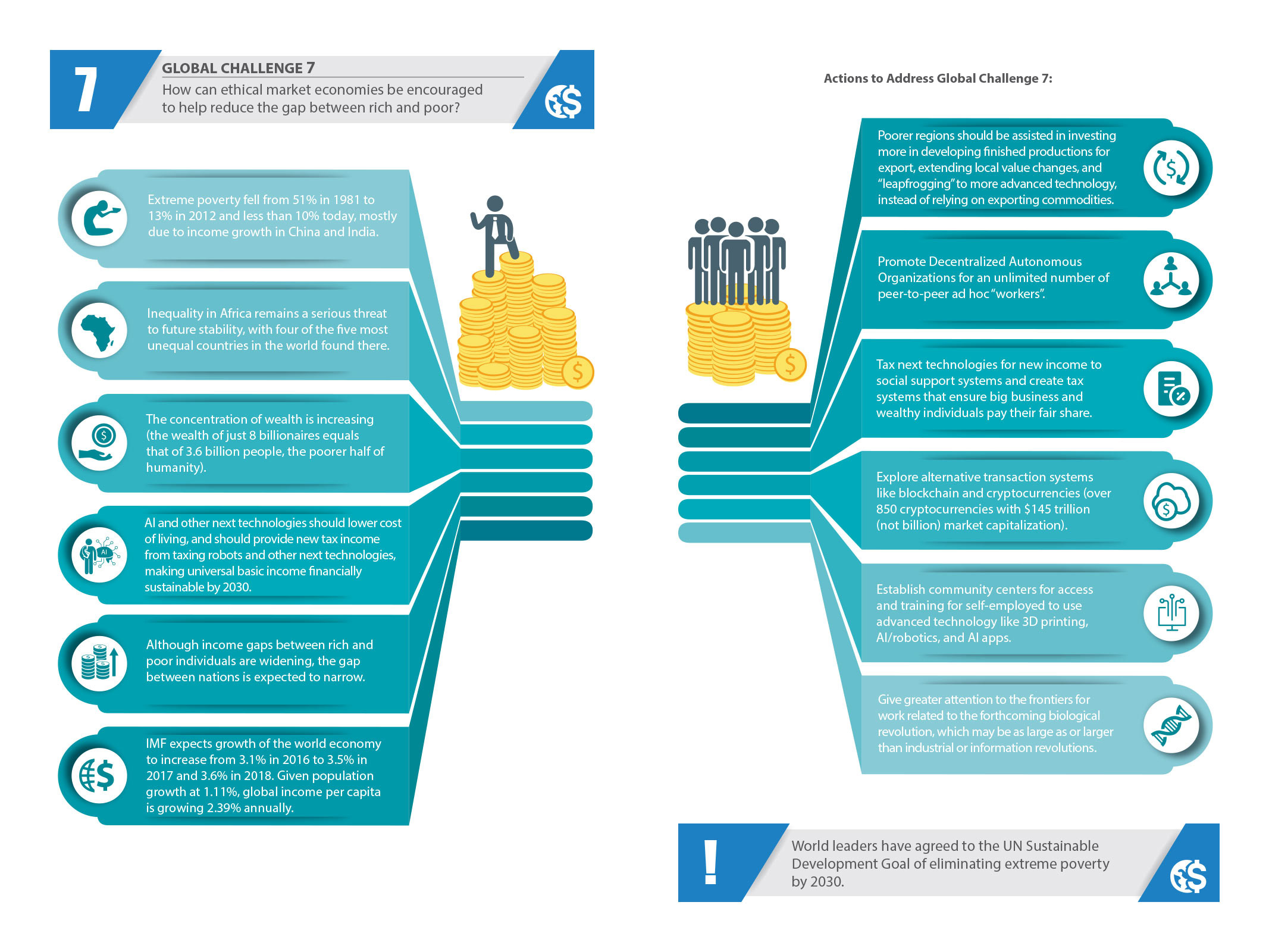 Global Challenge 7: How can ethical market economies be encouraged to reduce the gap between rich and poor?

Global Challenge 7: How can ethical market economies be encouraged to reduce the gap between rich and poor?

The Covid pandemic has shrunk the global middle class by 150 million, and extreme poverty increased approximately by 100 million; nevertheless, extreme poverty fell (less than $1.90/day) from 51% in 1981 to 13% in 2012 to less than 10% today, mostly due to income growth in China and India. Global economic growth is expected to slow from 5.7 percent in 2021 to 2.9 percent in 2022 and average 3 percent in 2023-24.Inequality in Africa remains a serious threat to future stability, with four of the five most unequal countries in the world being in Africa. UNDP reports that 1.2 billion people in 111 developing countries are living in acute multidimensional poverty. The Covid pandemic has delayed the achievement of the UN Sustainable Development Goal of eliminating extreme poverty by 2030, even though, official development assistance was the most in history reaching $161 billion in 2020.

Meanwhile, the concentration of wealth is increasing (The richest 10% ownes 84% of the world’s wealth and the top 1% owned nearly 44% the world’s wealth). Income gaps are widening, employment-less economic growth continues, return on investment in capital and technology is usually better than on labor, and future technologies can replace much of human labor; hence, long-term structural unemployment seems inevitable unless new approaches to economics and the nature of work are created (See Chapter 4 on Future Work/Tech 2050: Scenarios and Strategies).

Historically, inequality has been addressed through such mechanisms as war, revolution, debt relief, legal system reforms, tax adjustments, and land redistribution. The G-7 has agreed that countries should establish a 15% minimum corporate tax.

Since artificial intelligence will reproduce and learn faster than humans, its universal proliferation seems inevitable. Algorithms are already out-performing humans in driving cars, face recognition, complex games, and even some forms of medical diagnosis. AI and other next technologies should lower costs of education, transportation, and medical care and should provide new tax income from taxing robots and other next technologies, making universal basic income financially sustainable possibly by 2030 (see scenarios in Chapter 4). Finland, Canada, and others are conducting pilot UBI experiments.

Although income gaps between rich and poor individuals are widening, the gap between nations is expected to continue to narrow. Emerging market and developing economies are growing around 4–5% annually, while more advanced countries are growing closer to 2%. GDP may be a more useful measure for industrial economies than information economies; for example, the millions of people searching billions of computer pages totaling more than a trillion searches per year are not counted in GDP. Given population growth at 1.11%, global income per capita grew at 12.13% in 2021 after shrinking 4.13% in 2020. 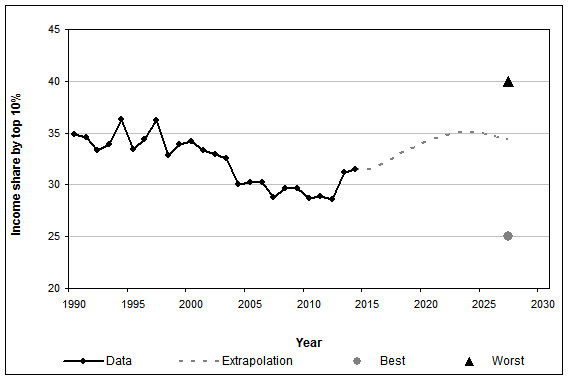 Source: World Bank indicators, with Millennium Project compilation and forecast
Short Overview and Regional Considerations
The world economic agenda has become increasingly dominated by growing income and wealth disparities, the fast shifts in geoeconomic powers, and the potential impact that automation and other S&T applications will have on the job market and the living standards of the many. The gap between industrial and developing economies is expected to keep diminishing, with the emerging markets and developing countries continuing to grow considerably faster, given their increasing labor force and expanding market potential, versus the industrial economies, which are mostly replacement markets. As the economic power of the emerging markets grows, local brands are also increasingly taking over foreign companies, further consolidating the economic and political positions of their countries and unfolding new opportunities. Building on the success of the Millennium Development Goals, the Sustainable Development Goals will further engage the international community to reduce inequality within and among countries, with a more comprehensive approach that includes social, economic, and environmental dimensions along with increased accountability.
Poverty is decreasing around the world:
Economic gap among countries is diminishing: World output passed $100 trillion (PPP) in 2013, reached almost 108 trillion in 2014, and is expected to be close to 150 trillion by the end of 2020. The average annual growth rate has been 3.4% over the past three years and the IMF projects a steady economic growth of 3.5% in 2015, 3.8% in 2016, and 4% in 2020, while the World Bank expects a global economic growth at an average of about 3.3% through 2017.
Per capita income gap will persist for the foreseeable future: Given the low economic starting point and their high population, emerging market and developing economies still have a long way to go for reducing the GDP per capita gap.
Inequality is increasing globally and within countries: Increasing concentration of wealth is one of the main factors undermining the rich-poor gap reduction. The 2014 World Economic Forum identified income disparity as the most likely global risk over the next decade, while in 2015, unemployment and underemployment were seen as being both likely and serious.
The ratio between wages and profit is increasingly and dangerously imbalanced, undermining long-term economic prosperity. Although financial leaders are placing inequality and structural reforms on the top of the world policy agenda, effective action has yet to be seen. Meanwhile, the 1% versus 99% movement entered the consciousness of the planet and question the integrity of financial leaders and the fairness of the current economic system calling for changes toward more sustainable prosperity.
Agriculture: is the second-largest source of employment in the world, with almost 35% of the workforce (over 1 billion people worldwide). Its contribution to global GDP is only 6%, compared with 31% for industry and 63% for the service sector. The Bali Package adopted by the WTO in December 2013 is expected to address the “tariff quota”, land-use programs, export subsidies, and other measures that will improve developing countries’ access to world markets, while also addressing their food security.
Unemployment: the economic slowdown and the prolonged “jobless recovery” lowering demand, might continue to affect unemployment. The ILO reports that:
Employment opportunities: While unemployment persists, many businesses lack qualified workers. Hence, a better collaboration is needed among the private sector, civil society, government agencies, and education institutions to create the human capital with the qualifications needed by today’s and tomorrow’s job markets.
ILO notes that some estimates show that spending 1.2% of GDP on active labor market policies could create an additional 3.9 million jobs in the developed economies and the EU region.
Over 3 billion people connected to the Internet and more than 7 billion mobile subscribers provide an environment with unprecedented economic opportunities–limitless markets and possibilities for self-employment and SMEs to find markets rather than applying for jobs.
New technologies and innovations are empowering people around the world, create new forms of business, raise productivity and free up important time for increasing human creativity and living standards. However, radical changes in the concept of work and profit sharing are needed so that the entire society benefits of the potential introduced by automation and AI. Some experts forecast that 50% of today’s occupations in corporations might no longer exist by 2025. This implies life-long learning and creative intelligence to continuously adapt to the fast changing technologies as well as to the new socio-economic structures of the evolving sharing economy.
Trade is an important instrument to reduce the economic gap among countries: Presently, a third of goods cross national borders, and over a third of financial investments are international transactions. WTOindicates that in 2014, world trade increased at 2.8%. The value of world merchandise was $18.9 trillion in 2014, an only 0.7% increase compared to the previous year, given the falling price of some primary commodities; meantime, the value of commercial services increased 4%, to $4.85 trillion.
Financing development and reduce the rich-poor gap: 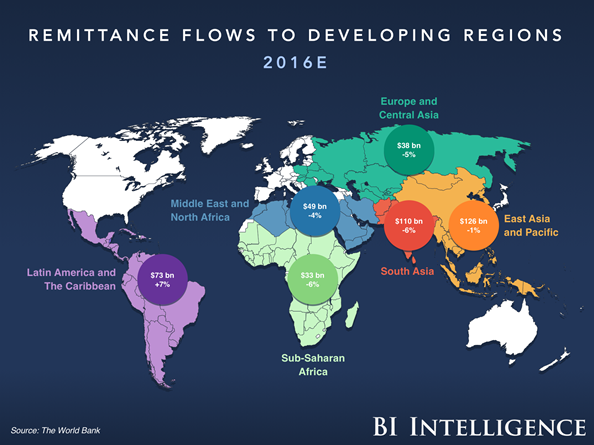 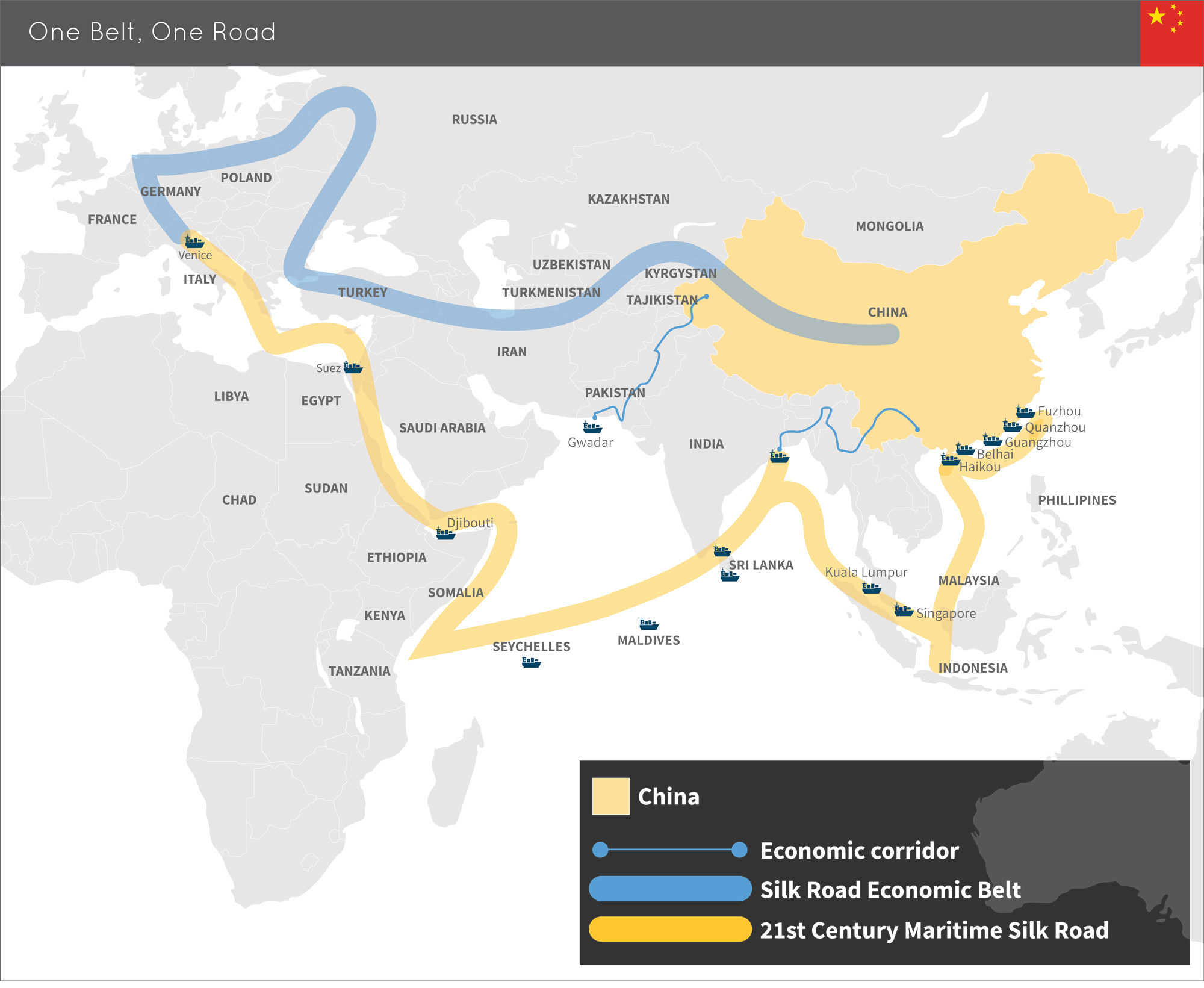 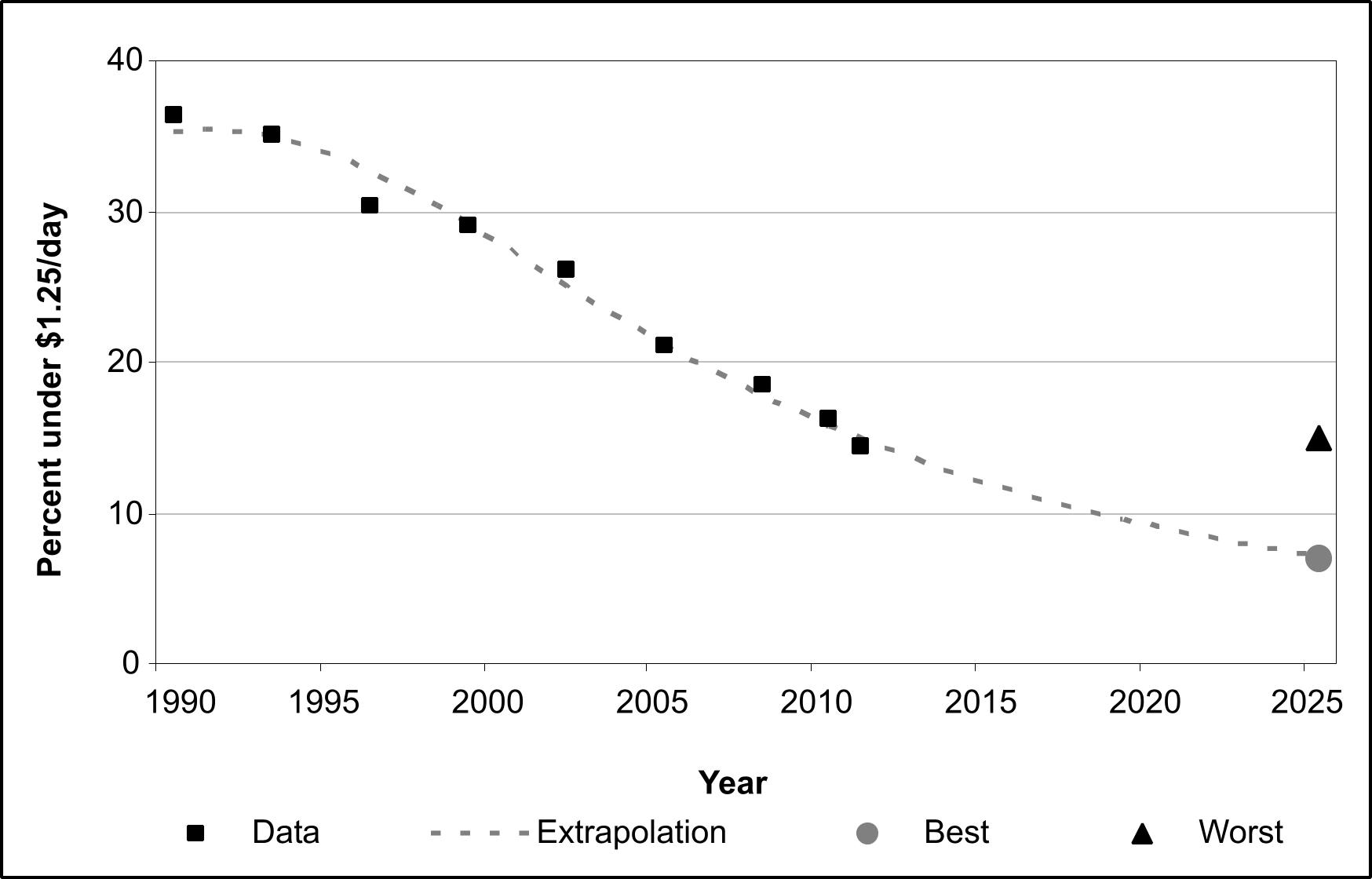 Source: World Bank indicators, with Millennium Project compilation and forecast; graph part of the 2015 State of the Future Index; details in the 2015-16 State of the Futurereport
GNI per capita, PPP (constant 2011 international $) 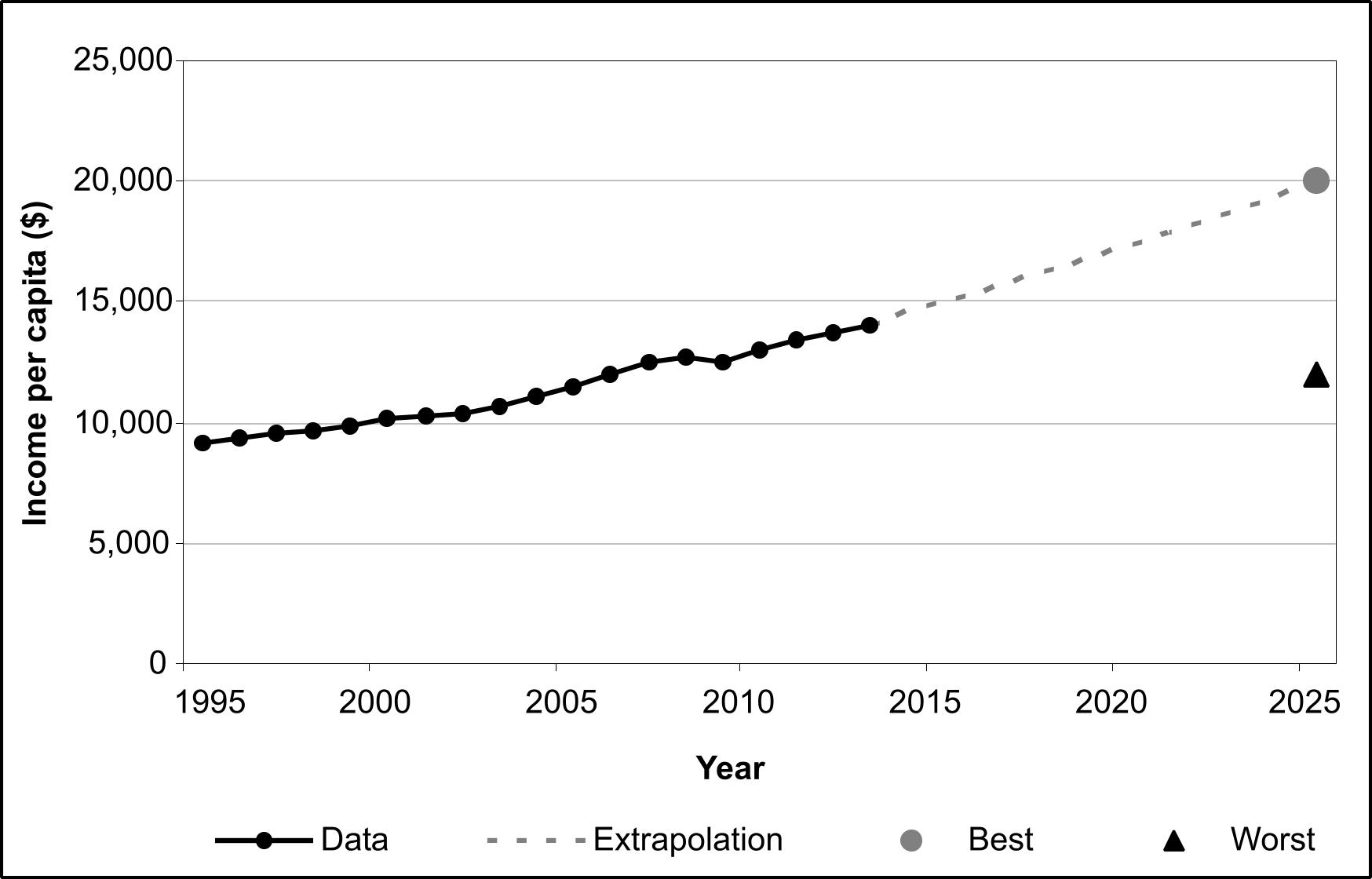 Source: World Bank indicators, with Millennium Project compilation and forecast; graph part of the 2015 State of the Future Index; details in the 2015-16 State of the Futurereport
Economic Income Inequality (% income share of the richest 1%)

Graph using Trend Impact Analysis; it is part of the 2012 State of the Future Index computation (See SOFI 2012)
Scroll