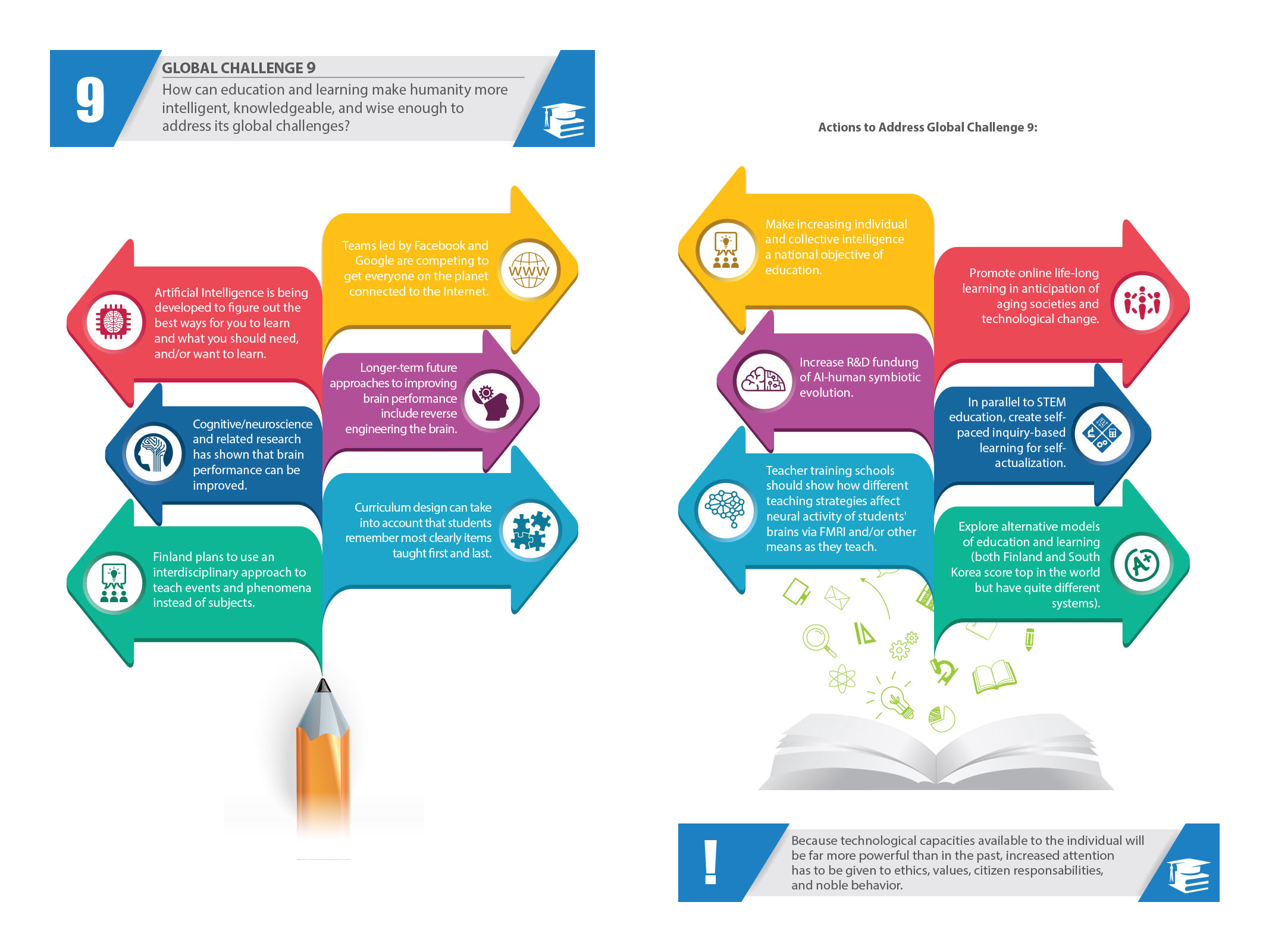 Challenge 9. How can education and learning make humanity more intelligent, knowledgeable, and wise enough to address its global challenges?

Artificial Intelligence will augment human intelligence.  It will diagnose the best ways for you to learn and what you should, need, and/or want to learn. Just as glasses augment our eyes to see better, we will augment our brains to become augmented geniuses; Neuralink is connection neurons to computers. Several companies are testing smart contact lenses and augmented-reality glasses to connect to the IoT. This should speed learning, reduce miscommunications, and make education far more interesting. Internet search engines are reinforcing curiously and life-long learning. Massive educational resources aided by AI are supporting teachers and students worldwide.  UNESCO is working with curriculum developers to integrate AI in all schools. Much of the world’s knowledge is available—either directly or through intermediaries—to the majority of humanity today via many forms of online education. Google and Wikipedia are helping to make the phrase “I don’t know” obsolete. Free online, self-paced courses proliferate on everything from synthetic biology to elementary arithmetic. The Covid pandemic has accelerated tele-education and learning. Starlink is expected to complete global access to the Internet for everyone on the planet. The price of laptops and smart phones continues to fall, and IoT with data analytics gives real-time precision intelligence. However, much greater attention is needed to successfully apply all these resources to develop wisdom, rather than information pollution and social polarization. Low-cost AI, robotics, and other NTs (next technologies) will lead to the replacement of most repetitive human labor; thus, education and learning should focus more on creativity, problem solving, entrepreneurship, and increasing intelligence.

Cognitive/neuroscience and related research has shown that brain performance can be improved by 1) responding to feedback; 2) providing consistency of love and social-emotional support within a diversity of environments; 3) nutrition; 4) reasoning exercises; 5) the belief it is possible (placebo effect); 6) personal contact with intelligent people or via VR simulations; 7) responsible use of software systems and gaming; 8) neuro-pharmacology (enhanced brain chemistry), 9) memes on classroom walls and elsewhere (e.g., intelligence is sexy); and 10) sufficient sleep, low-stress, stimulating environments, with certain music, colors, and fragrances, improves concentration and performance. Longer-term future approaches to improving brain performance include reverse engineering the brain such as national brain projects in the U.S., EU, China, and others; applied epigenetics and genetic engineering; and microbes via synthetic biology to eat the plaque on neurons of the elderly. Age-related memory loss can be improved by exercise, learning new skills,  TET1 to repair myelin, nutrition, and others on the way. Google Brain, IBM’s Watson, DeepMind, and other AI efforts are intended to augment human intelligence. To speed up learning applications of advances in cognitive science and brain research, Ministries of Education should declare increasing intelligence as a national goal of education.

Meanwhile, innovations are occurring inside and outside of classrooms across the world. Finland plans to use an interdisciplinary approach to teach events and phenomena instead of subjects. China plans to make 3D printers available in its 400,000 elementary schools in two years. South Korea uses telepresence robots with remote native speakers to teach English. Dubai uses 3D glasses, holograms, and VR for immersive learning. Advances in cognitive science research should inform teaching strategies. Curriculum design can give frequent ungraded assessments; allow student opportunities to reflect on learning/performance; teach students to self-test when studying (simply re-reading notes hurts student long-term learning); emphasize the importance of sleep in learning/memory consolidation; make sure students understand their ability to improve their own brains (neuroplasticity and placebo effect); give students opportunities for choice in learning (enhances engagement/intrinsic motivation); make sure students and teachers understand the effects of stress, fear, and fatigue on higher-order reasoning and memory; allow opportunities to transfer learning through visual/performing arts; help students understand the role of brain anatomy in learning; use immersive virtual and augmented reality devices; allow frequent opportunities to play; enhance experiences of freedom; and increase teachers’ digital competences. Youth literacy rates have improved from 83.4% in 1990 to 91.9% in 2020.

Massive Open Online Courses (MOOCs) have enrolled 220 million students in 950 universities offering nearly 20 thousand courses over the past decade (data not including China); 40 million new students signed up for at least one MOOC in 2021.

Because technological capacities available to the individual will be far more powerful than in the past, increased attention has to be given to ethics, values, citizen responsibilities, and noble behavior. And because humanity is becoming far more connected and globalized, special attention should be given to world and macro history, while learning one’s own culture and civilization. 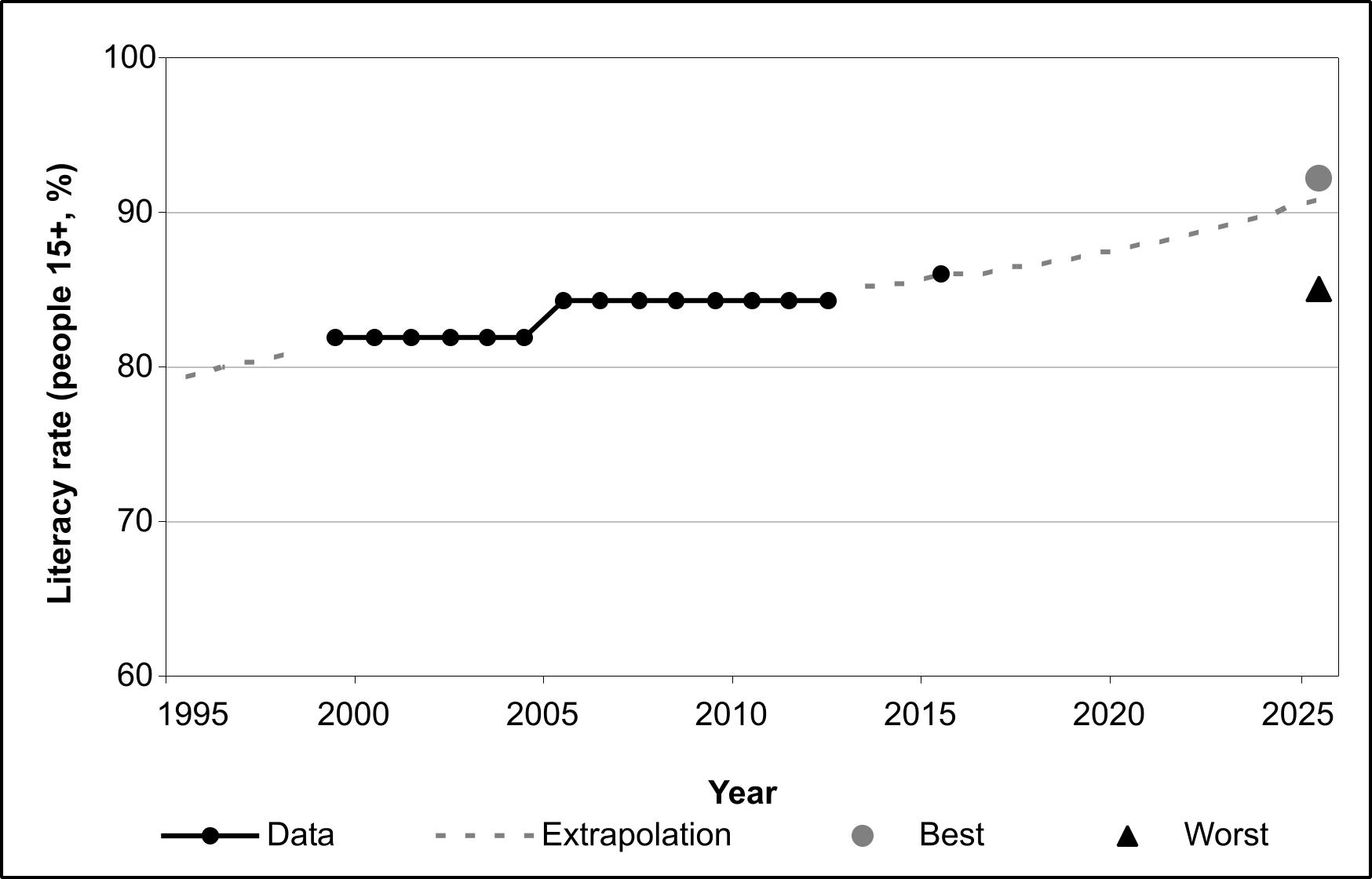 Source: World Bank indicators, with Millennium Project compilation and forecast; graph from the 2015-16 State of the Future
Share of high-skilled employment (%) 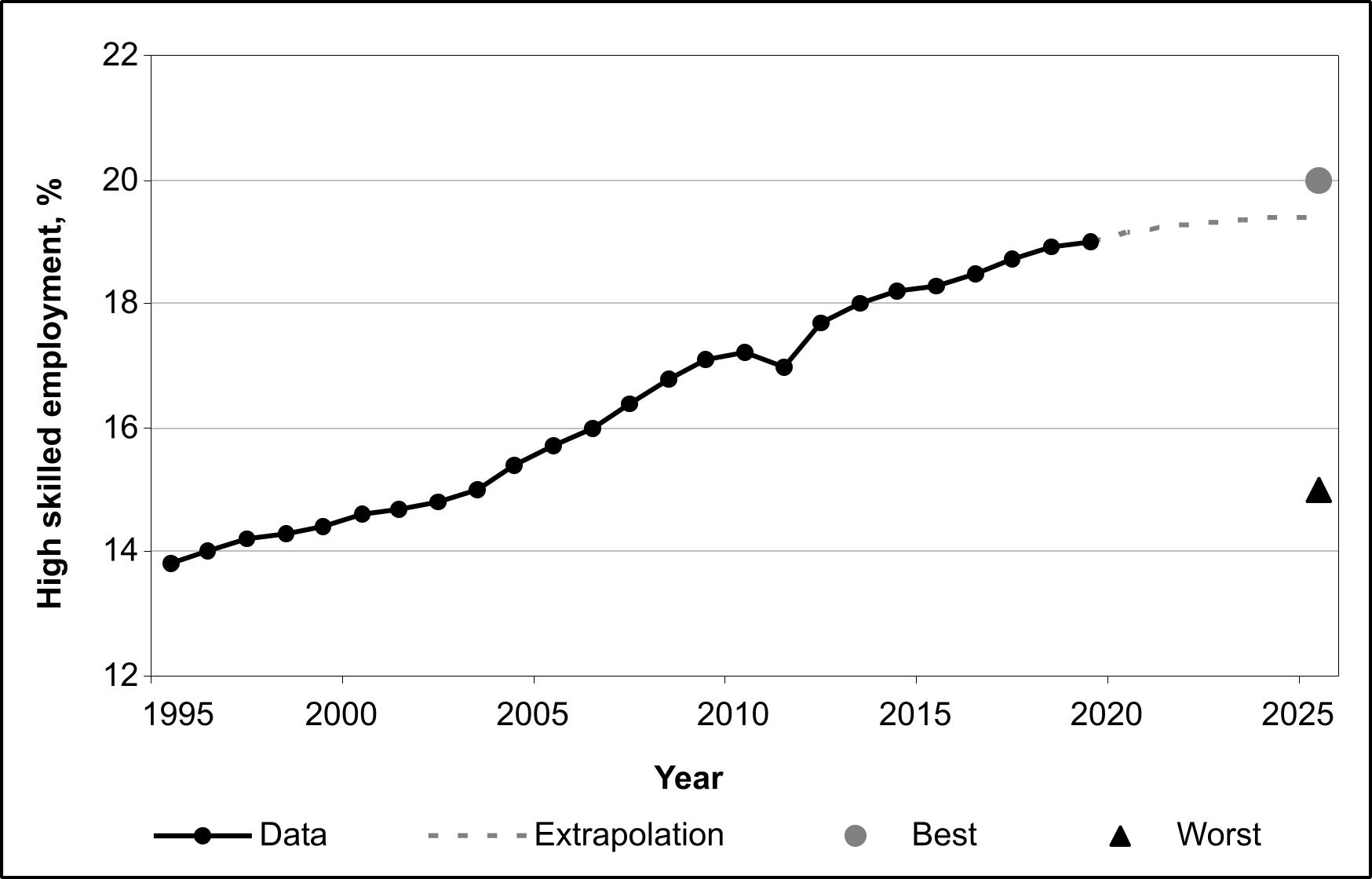