Long-range strategic threats to the survival of humanity are well-documented, ranging from the potential of advanced artificial intelligence growing beyond human control to weakening magnetic fields that protect life on Earth.

Although the United Nations includes agencies that are addressing many of the problems facing humanity today, there is no central office to identify, monitor, anticipate, and coordinate research on long-term strategic threats to humanity.

A UN Office on Strategic Threats, which would centralize and coordinate information and prospective studies on a global scale, could serve international agencies, multilateral organizations, nation-states, the private sector, academia, and humanity in general.

This idea was raised and discussed in detail during World Future Day, March 1, 2021 – a 24-hour conversation of nearly a thousand experts from 65 countries, organized by several international associations of futurists and think tanks to discuss strategies for improving the global future.

The signatories of this open letter – academics, diplomats, scientists, and experts in foresight and strategy – from different countries and sectors – ask Your Excellency to welcome and facilitate the adoption of a UN General Assembly Resolution at this September’s General Assembly that would give the General Secretariat the mandate to conduct a feasibility study on establishing a UN Office on Strategic Threats.

Although the United Nations includes agencies that are addressing many of the problems facing humanity today, there is no integrated central office to identify, monitor, and anticipate long-term strategic threats to humanity, and to coordinate efforts for preventing them.

There are many dangerous trends—such as decreasing fresh water per capita, the concentration of wealth, and ethnic violence—but these do not pose a threat of the extinction to humanity. However, there are long-term threats that do. Such strategic threats include a single individual creating and deploying a weapon of mass destruction (most likely from synthetic biology), loss of control over future forms of artificial intelligence, nuclear escalation and proliferation, uncontrollable pandemics, catastrophic global warming, asteroid collision, weakening of the Earth’s magnetic shield, solar gamma ray bursts, malicious nanotechnology  (including the “gray goo” problem), and a particle accelerator accident (antimatter, black hole). There is no single point for collaboration in the UN system that addresses such long-term threats to human survival.

A UN Office on Strategic Threats could centralize and coordinate information and strategic thinking on a global scale. It would identify and assess long-range trends and synergies among potential future threats. It would serve the main international agencies, multilateral organizations, nation- states, and humanity in general.

The idea was raised during the celebration of the “World Future Day” on March 1, 2021, in a global online conference of more than a thousand experts from 65 countries. The participants were from universities, governments, corporations, and the main foresight organizations and think tanks such as The Millennium Project, the Association of Professional Futurists, UNESCO Future Literacy, Humanity+, the World Futures Studies Federation, World Academy of Art and Science, the Ibero-American Foresight Network, the Foresight Europe Network, and the Chilean Council for Foresight and Strategy.

Following subsequent discussions with experts, The Millennium Project suggests that the next UN General Assembly—to be held in September 2021—is the right forum for the discussion and adoption of a Resolution that would give the General Secretariat the mandate to assess the feasibility of a UN Office of Strategic Threats.

This initiative needs the endorsement of governments, so that it can be included on the agenda of the UN General Assembly. The UN Missions to the UN could play an important role in supporting the creation of this UN Office by offering a UN General Assembly Resolution to study the feasibility of such a UN Office.

Tripping Points on the Roads to Outwit Terror 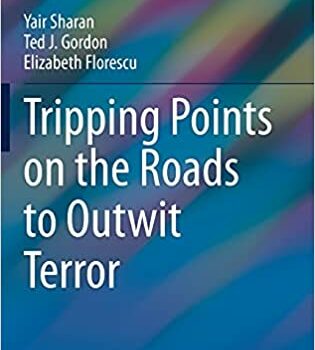